Indonesia held their first national workshop to develop an alternative design and upgrading of the Winongo and Gajahwong rivers in Yogyakarta, in Java. The workshop comprised of two phases: participatory mapping of 23 riverside communities from December 2013 to February 2014, followed by a design and planning “problem-solving” workshop for six settlements in May.

With the majority of riverbank land belonging to the Sultan of Yogyakarta, the objective was to integrate a program for settlement upgrading and improvement into city policy, integrating not only physical development plans, but social and environmental agendas as well. The communities presented their ideas to the government as a community-based alternative to the Yogya’s 2030 city-planning agenda to redevelop the river as a tourism object and new icon of the city, while celebrating Gotong Royong, the Javanese cultural belief that solving problems should best be done together.

Arkomjogja and Paguyuban Kalijawi facilitated the workshop, supported by architecture students and young professional from various cities across the country, as well as local NGO’s. Paguyuban Kalijawi is a savings group network of housewives on Gajahwong and Winongo riverbank, who have been organizing and saving together for two years. Du- ring the workshop they coordinated the communities while Arkomjogja offered technical and social assistance. Arkomjogja helped to build a relationship of trust and confidence between communities and the city government, and leverage Paguyuban Kalijawi to become an important actor in policy at city level, as a viable, self-sufficient source of knowledge and resources.

The alternative river planning would focus on upgrading strategies to improve sanitation, infrastructure and environmental vulnerability. 6 kampungs were selected after the mapping for re-planning and upgrading based on major issues of risk exposure, land security, physical and environmental issues as well as social problems. The alternative redevelopment of the city would see a river design that recognises and enhances the cultural and economic value of using local materials, skills and traditional technologies, while putting the community as a main actor in development, planning, implementation and also maintenance of the river.

University architects involved in the mapping and design process reported learning about settlement and city-planning dynamics, and that architecture was not only a physical reailty but a social practice, and stated they were keen to be involved again. The Indonesian team was lucky to have friends from CAN Phillippines, who are now expert at community working towards a city scale. They gave useful advice and shared many experiences in how to engage with communities and deal with the government throughout the workshop.

The mayor expressed openness from the beginning to accommodating proposals made by the community in future policy, and delegated the department of Development and Planning to implement results from the workshop. 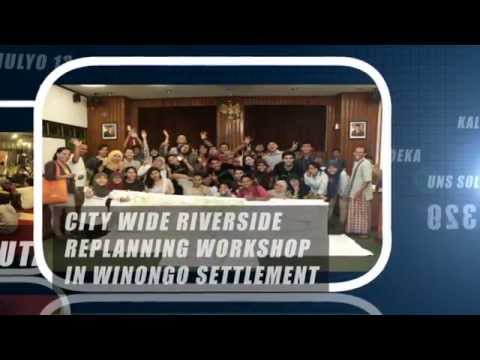